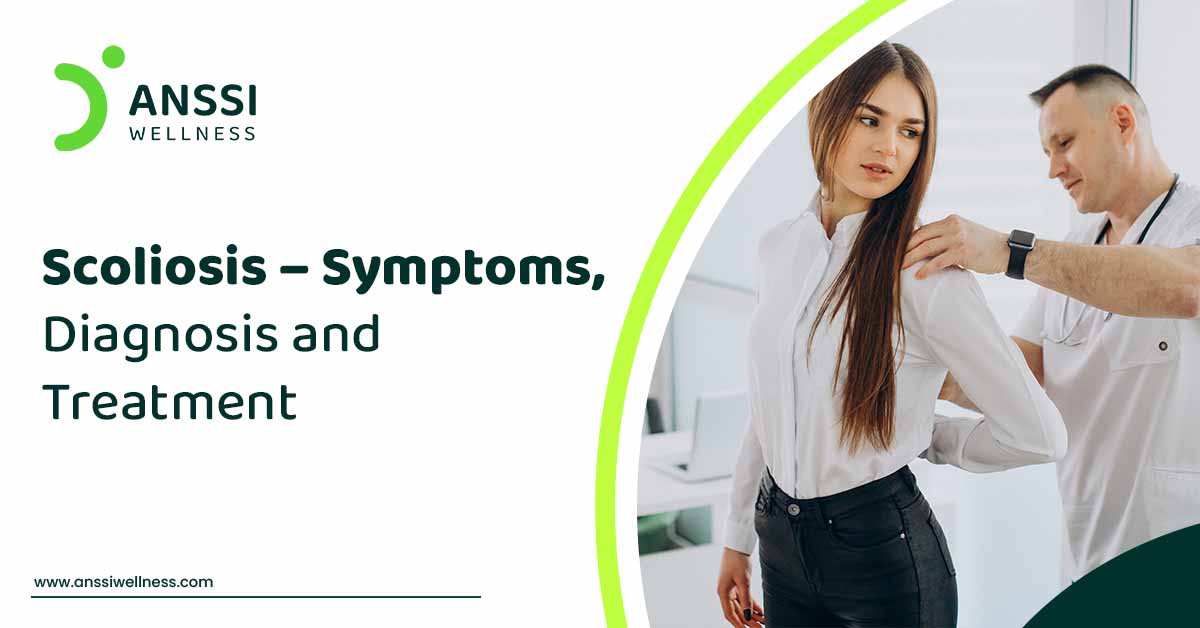 Is your school-going child walking with an abnormally hunched back? If yes, then he may have scoliosis – a common spine condition usually found in adolescents. Check out this blog to know about this spine condition in detail about symptoms, diagnosis, and treatment.

Scoliosis is an abnormal sideways curvature of the spine that resembles the letter C or S. The angle of the curve, when over 10 degrees on an x-ray, is said to be scoliosis. It’s generally diagnosed in young children in their early adolescent years.

Signs and Symptoms of Scoliosis

The various signs & symptoms of scoliosis may include:

Besides visible signs, scoliosis may cause:

What are the Common Types of Scoliosis?

The 4 common types of scoliosis include:

The most common type of scoliosis, Idiopathic Scoliosis doesn’t have a definite cause. As per research, it seems to be genetically inherited in many cases. It’s generally mild in nature and requires no extensive treatment. Also, it’s 8 times more likely to affect girls as compared with boys.

Congenital scoliosis is a rare condition that starts taking effect as a newborn baby’s back begins developing before birth. Issues with the small bones in the back known as vertebrae can lead to a curve in the spine. The vertebrae might be incomplete or not properly divided.

Doctors might be able to detect congenital scoliosis at the birth of the child, or it may remain undetected until the child’s early teenage years.

Neuromuscular scoliosis is generally a consequence of a disorder such as cerebral palsy, spina bifida, or a spinal cord injury. These disorders can cause muscle damage, making the muscles incapable of supporting the spine in the required manner, resulting in a curved back.

Featuring a sideways curve in the spine, degenerative scoliosis is caused due to age-related wear & tear of the discs and joints of the spine. It’s typically seen in adults and affects the lower back region in most cases.

The primary causes behind the most common scoliosis type (Idiopathic Scoliosis) remain unknown to date, although hereditary factors seem to have an influence. Having said that, these are the known causes behind other types of scoliosis:

How is Scoliosis Diagnosed?

Scoliosis is diagnosed in the following two ways:

Most scoliosis cases can be detected through a physical exam. Doctors generally observe the back and look for any spine curvature or uneven shoulders/rib cage/waist while the patient stands still with the arms at the sides and then bends forward on the doctor’s instruction.

Doctors may prescribe any of the following imaging tests to get a better overview of the spine:

A regular x-ray usually helps diagnose scoliosis and the severity of the curve in the spine.

What are the Treatment Options for Scoliosis?

As per the severity of the spinal curvature, the treatments for scoliosis differ. Mild curves in children typically don’t require any treatment, with regular monitoring necessary to check for potential worsening.

In cases where the curve is moderate or severe, the following factors are taken into consideration before deciding on treatment:

After taking into account the above factors, the following treatment options are recommended by doctors:

The majority of the cases of scoliosis are mild, with few signs & symptoms to be worried about. However, in severe cases, quick & proper treatment is essential to treat the condition and maintain the quality of life.

If anyone in your friends or family circle has been diagnosed with scoliosis and recommended surgery by a doctor, then make sure to consult the Spine Specialists at ANSSI Wellness Centre for Expert Guidance!

Call on the following number to book a consultation at your nearest ANSSI Wellness Centre: 9004726844

1) What does scoliosis do to a person?

Scoliosis causes a sideways curvature of the spine in a person. The curve resembles the shape of the letter C or S.

Most scoliosis cases are mild. Having said that, some curves in the spine may become severe with age.

3) Will scoliosis get worse with age?

Some types of scoliosis such as Mild Idiopathic Scoliosis doesn’t worsen with age. However, individuals with curves of over 50 degrees are considered to have worsening symptoms with a rise of 1-2 degrees in the curve every passing year.

Having completed his MBBS from Talegaon, Pune and his D.Ortho from Bombay Hospital, Dr. Pawan Kumar Jadhav has worked with many govt as well as private hospitals as a Consultant in Orthopaedics. At ANSSI, he has consulted more than 1000 spine patients and treated more than 250 spine patients successfully through the Spinal Decompression Treatment.

He has consulted more than 4000 patients for three years with us and thoroughly observed the results of spinal decompression.

He has been a full-time doctor with ANSSI WELLNESS CENTER for the last three years and he got expertise in spinal decompression.

Woman with 50% Compressed Cervical Disc is Successfully Treated without Surgery >>

Get your active lifestyle back!

With 3500+ success stories since its inception in 2012, ANSSI via its USA patented technology for Non-surgical Spinal Decompression Treatment has successfully treated patients across India, South Africa, Iran, Sri Lanka, Maldives, Tanzania & Canada for spinal disorders without any surgery.